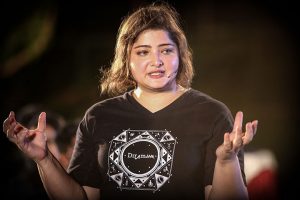 Vasundhara Das is a multi-faceted, multi-lingual personality successfully straddling many worlds. She is well known for her skill in both the film and music industries in India. When it comes to singing, she has trained in Hindustani Classical Music from an early age & has made her mark in the popular music scene in India with many hit songs in Indian films. She has also been collaborating on many independent music projects over the span of her career so far. Her current focus is on music composition at her Bangalore based studio called The Active, where she creates original independent music. Vasundhara also performs extensively on stage, in solo appearances as well as along with her band.

Vasundhara and her partner Roberto Narain run Drumjam, one of the organizations that pioneered the use of drum circles for corporate training, team building and community building at corporations, communities, schools and colleges in India. Drumjam, over the past 10 years, has worked with diverse communities as well as leaders of industry across all sectors and has made approximately half a million people experience music through group drumming.

In addition to her extensive training and experience as a musician, Vasundhara has trained in Drum Circle Facilitation with Arthur Hull. She has also trained with Christine Stevens as a HealthRhythms Facilitator. Over some time now, she, along with Roberto and their team, has been facilitating Drumjams for many varied groups of people such as Corporate, Community, Schools & Colleges. With experiential learning as the core intent, she facilitates programs that expose participants not only to an interesting mix of elements of music like rhythm, melody and harmony, but also encourage creativity using related artistic elements like body percussion, movement and storytelling, in a format that is very interactive and engaging.

In the year 2017, Vasundhara & Roberto started the Community Drumjam Foundation in order to take this activity to people who were unable to access their monthly Community Drumjams such as children at risk, physically challenged individuals, well elderly, elderly with Dementia, Parkinson’s and Alzhiemers, recovering addicts and many more such populations.

In 2017, Vasundhara became a Certified Trainer for Arthur Hull’s Village Music Circles Global in India, in order to train and empower others with skills of drum circle facilitation so that there can be a greater impact of this work in her country. She is one of 14 International Trainers who constitute the Village Music Circles Global Trainer Team.

Presently, Vasundhara alongside being a Drum Circle Facilitator and VMC Certified Trainer continues her work as a recording artist, composer and performer. 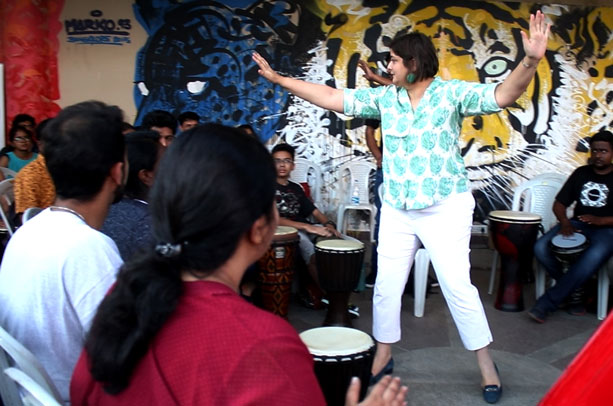